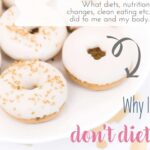 Are you on a diet at the moment? If so, you should know the after-effects of food restriction and dieting. This post will also help you find tips on how to lose weight without a diet – and above all how to lead a happier life without dieting.

For most people the beginning of the year is all about one thing: losing weight, exercising more, making up for the lack of moderation during the last month, good intentions, and lots of sacrifices. Even those who are not interested in these kinds of New Year’s resolutions will be confronted with the topic on every corner:

Discount offers on fitness equipment and diet or sugar-free products, and meal replacement shakes at bargain prices. Because everyone knows: obesity is a growing problem in the Western Hemisphere which can and must be dealt with by dieting and a lot of sports.

A simple formula for weight loss

It is very simple: consume fewer calories than you need while at the same time losing more calories through exercise. Mathematically speaking, this way you should have your bikini body in no time. It’s all a question of perseverance and resolve. All you have to do is fight your inner couch potato and successfully convince yourself that cauliflower pizza „dough“ is really tasty …

And since this is so simple in theory, it leads to one logical conclusion: If you are still too fat, you have only yourself to blame for it. You just haven’t tried seriously enough, you’re too weak and have no willpower. As someone who has managed to control her weight with a diet, these were my thoughts as well. But that changed…

When at the age of 36 you’ve spent 25 of those years dieting, then one can probably speak of experience in this area. I tried a whole list of different diets:

With targeted exercise and a moderate reduction of carbohydrates, I managed to shrink from (US) size 18 to size 8 in 2008. And even after three pregnancies, I stayed at size 10.

Now, you could raise two objections to why I am writing this post at all:

The problem with trying to keep your weight

Well, I can meet the first objection with the fact that a few persistent pounds were left behind from the third pregnancy. Not enough to have to buy trousers a bigger size, but enough to not feel comfortable in the old ones.

Now one obvious conclusion here would be going back to my old program and sacrifice food and within a few months, the few pounds would no longer be an issue.

But – and this brings me to the answer to the second objection – after many years of struggling with dieting, this is what I learned:

Diets (no matter how weird or moderate) do not address the basic problem. They actually turn into the main problem. In addition, today I know that I belong to a very lucky, but also very small minority: 95-98% of all dieting people are not able to maintain their weight.

Numerous studies even prove that it is only a question of time until the lost weight is gained again – and usually it’s even more than before. Some even go so far as to say that dieting and food restriction is the best way to add more weight.

So let’s see why this is the case.

Apparently, I’m not the only one who stops sticking to diet restrictions and food bans at some point.

Our brain is wired to do everything possible to protect us from starvation and therefore finds ways around restrictions. It’s not interested in things like outward appearance or body image. Its priority is survival.

By the way, recent findings show that the area in the brain that is responsible for willpower and self-control also seems to be highly linked to the body’s blood sugar level. It’s downright silly that one needs the most willpower during a diet when the blood sugar level is often very low.

The battle against extra pounds, therefore, has an unexpectedly strong opponent: your own body.

The hunger study by Ancel Keys

I found a study from the 1940s to be eye-opening. It examined the effects of long periods of hunger and food restriction on soldiers.

A group of strong young men was only allowed to consume about 1600 kcal per day for several months. People on a diet might frown at this point and ask “That many calories?!?”.

The effects of this experiment on the physically and mentally fit men were incredible:

According to current standards, the study is regarded as an unethical hunger study that must not be repeated in this way. And that’s on 400 calories more than some weight-reduction diets in hospitals.

The fight against psychology

The psychological aspect of diets became surprisingly clear through the study. What is the automatic response to the request NOT to think of a blue elephant? What happens when you can eat anything but apples?

Even if you don’t particularly care about apples, a ban will suddenly increase your interest. Restricting certain foods makes them especially interesting for the brain. And that is why it takes a lot of willpower not to eat the forbidden, unhealthy foods.

For a while, it is possible to do without. You feel good, lose a bit of weight, have the feeling of control and you can clearly see the goal in front of your eyes. And that is seen as proof that dieting works.

However, after a few weeks of exhaustion or stress, this high feeling is dampened. And the result is usually that you eat everything that was forbidden for so long. Or you can’t stop after the one allowed cookie and you eat four more. What follows now is something that I thought for years was a very personal sign of my inadequacy, but interestingly enough it occurs across cultures: The “Now nothing matters anymore” reaction, which is a direct consequence of diets.

Instead of just accepting the additional 300 kcal of four illegal biscuits and stopping right there, a switch now flips: the person who is actually willing to lose weight eats whatever “illegal” food is within reach. But they do this with a bad conscience and the feeling of failure. And, of course, with the firm intention of making things right again tomorrow/next week/after New Year’s Eve with even stricter rules.

Through this “Now nothing matters anymore” response, thousands of extra calories are easily absorbed – multiple times more than the initial four biscuits that triggered the whole episode. And so the cycle starts all over again.

The much deeper problem is usually not what we eat. On closer inspection, you will notice that most of the unnecessary calories come from somewhere else: We eat for reasons other than hunger.

I often found it difficult when a dieting program promised that you would definitely not be hungry. That might be true, but what should I do with my appetite? My appetite seemed to me to be a much bigger problem and, of course, it was particularly focused on “banned” foods.

I now know that most of these cases fall into the category of emotional eating. And that has about as much to do with physical hunger as cauliflower pizza „dough“ with real dough. A diet doesn’t help me to distinguish whether real hunger or a certain feeling cause my desire for walnuts/carrot sticks/chocolate.

Now you could ask: What is the way out of obesity if it is not dieting and food restriction? Based on everything I have learned so far, I believe that a combination of rather unpopular methods reduces weight in the long run – and above all, leads to a relaxed, healthy and emotionally regulated way of dealing with food:

So does it really matter what I eat?

Yes and no. In the healthy eating category on this site, you will find a few posts that deal with this question (and I’m adding more over time). When this post was first published, I was still at the very beginning of my learning process. How the process of learning more about intuitive eating affected my quality of life and weight in the following years can be found here:

If you can see yourself in this post and want to break out of the eternal spiral of diets, then you may take hope.

It is not your own failure if a diet does not work. Diets are the wrong tool.

Look around in my posts on this subject and take yourself on a journey towards freedom. It took me four years to learn, but being able to be relaxed and eat without pressure and stress was worth all the effort.

How to Have Your Cake and Your Skinny Jeans Too: Stop Binge Eating, Overeating and Dieting For Good Get the Naturally Thin Body You Crave From the Inside Out (Binge Eating Solution Book 1)*
Amazon Kindle Edition; Spinardi, Josie (Author); English (Publication Language); 222 Pages - 01/31/2013 (Publication Date) - Twirl Media (Publisher)
$9.99
Sale

Last update on 2023-02-09 at 02:00 / As an Amazon Associate we earn from qualifying purchases. / Images from Amazon Product Advertising API